MediaWiki is the collaborative editing software that runs Wikipedia. This page documents its deployment at Wikimedia Foundation. 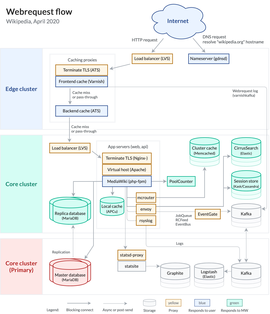 A Wikipedia web request is processed in a series of steps outlined here (as of April 2020).

The application servers are divided in the following groups:

For web requests using Apache, the "Hiera cluster" value is also exposed as $_SERVER['SERVERGROUP'] to PHP.

In Grafana dashboards, Prometheus metrics, and Icinga alerts the cluster field usually refers to the "Hiera cluster" value as well.