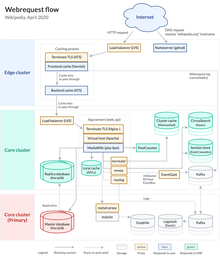 This page documents the traffic routing and caching infrastructure from a high level. It details which layers of the infrastructure exist in cache PoPs, which exist in data centres, and how traffic flows through them.

Prior to 2019, we used Nginx- for TLS termination (instead of ATS), and used a second Varnish instance for the backend cache (instead of ATS). In older documetnation "Varnish" thus might be referring to the cache backend (which runs ATS now).

When LVS balances traffic to ports :80 (varnish), and :443 (nginx), it uses a hash of the client IP to help with TCP Fast Open and SSL session persistence respectively.

Within the caching layer (cp#xxx machines), the jump from nginx:443 to varnish:80 is direct on the local host.

However, the jump from varnish:80 (frontend) to varnish:3128 (backend) is different: for that jump, we hash on the URL (and other req meta-data) when balancing to the backends to divide the cache space among all machines, and thus the request typically moves from one machine to another within the same cluster. 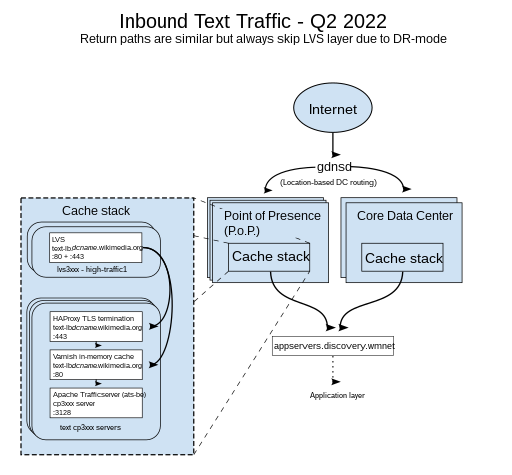 Current cache clusters in all datacenters:

X-Cache is a comma-separated list of cache hostnames with information such as hit/miss status for each entry. The header is read right-to-left: the rightmost is the outermost cache, things to the left are progressively deeper towards the applayer. The rightmost cache is the in-memory cache, all others are disk caches.

In case of cache hit, the number of times the object has been returned is also specified. Once "hit" is encountered while reading right to left, everything to the left of "hit" is part of the cached object that got hit. It's whether the entries to the left missed, passed, or hit when that object was first pulled into the hitting cache. For example:

An explanation of the possible information contained in X-Cache follows.

Not talking to other servers

Talking to other servers

Some subtleties on pass: different caches (eg: in-memory vs. on-disk) might disagree on whether the object is cacheable or not. A pass on the in-memory cache (for example, because the object is too big) could be a hit for an on-disk cache. Also, it's sometimes not clear that an object is uncacheable till the moment we fetch it. In that case, we cache for a short while the fact that the object is uncachable. In Varnish terminology, this is a hit-for-pass.

If we don't know an object is uncacheable until after we fetch it, it's initially identical to a normal miss. Which means coalescing, other requests for the same object will wait for the first response. But after that first fetch we get an uncacheable object, which can't answer the other requests which might have queued. Because of that they all get serialized and we've destroy the performance of hot (high-parallelism) objects that are uncacheable. hit-for-pass is the answer to that problem. When we make that first request (no knowledge), and get an uncacheable response, we create a special cache entry that says something like "this object cannot be cached, remember it for 10 minutes" and then all remaining queries for the next 10 minutes proceed in parallel without coalescing, because it's already known the object isn't cacheable.

The following functionalities are provided by all cache backends:

For ParserCache: Values in ParserCache are verifiable by revision ID. Edits will naturally update it.