wmf.webrequest and wmf_raw.webrequest within the Wikimedia Foundation's pageview data pipeline (Hive/Hadoop is the rounded box at the bottom)

The webrequest datasets contain logs of all the hits to the WMF's servers (specifically, the Varnish servers). This includes requests for page HTML, images, CSS, and Javascript, as well as requests to the API.[1] For privacy reasons, this data is purged after 90 days.

For many purposes, it is preferable to query the much smaller pageview_hourly and projectview_hourly tables. These are derived from webrequest by filtering to keep only pageviews and aggregating over a predefined set of dimensions.

The wmf.webrequest table in Hive is a "refined" version of the webrequest data. It contains the same rows (requests) as the wmf_raw.webrequest table, but with additional fields added during the refinement phase. It is stored in the Parquet format. Parquet is a column-based data storage format. When querying wmf.webrequest, Hive will not have to parse JSON, and it will only have to read in data from disk for columns that you are explicitly using in your query. This should increase performance of most Hive queries. See Data Format Experiments#Results for more info. 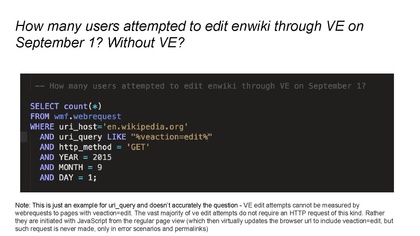 Note the webrequest_source, year, month, day, and hour fields. These are Hive partitions, and are explicit mappings to hourly imports in HDFS. You must include at least one partition predicate in the where clause of your queries (even if it is just year > 0). Partitions allow you to reduce the amount of data that Hive must parse and process before it returns you results. For example, if are only interested in data during a particular day, you could add where year = 2014 and month = 1 and day = 12. This will instruct Hive to only process data for partitions that match that partition predicate. You may use partition fields as you would any normal field, even though the field values are not actually stored in the data files.

The spider/user classification recorded in the agent_type field is based on the user agent, evaluated against some regexes (the standard spider detection provided by ua-parser augmented by a custom bot regex, see code for detail).

See also Cache log format and refinery code for more detail about the provenance and format of some of the fields.

See also m:Research:Page view#Change log for changes to the page view definition itself, as well as Analytics/Data_Lake/Traffic/Pageview_hourly#Changes and known problems since 2015-06-16

Queries over the full table will sometimes fail with a java.io.FileNotFoundException: File does not exist error during execution, in case the purging of the oldest data (after 90 days) happens before the query accesses those partitions. This can be avoided by manually excluding the oldest available dates in the WHERE clause.

Likely you do not want to query the raw tables (your queries will be slow). The refined table (see above) has a more friendly format when it comes to compression.

If you do query the raw tables, add the json "serde" to your path (serde: Serializer and Deserializer):

In addition to the core data, two tables are created with detailed statistics about the hourly partition loaded.

The statistics in those two tables are computed using a 'sequence' number, a counter generated by each varnish-kafka process incrementing its value for each line it outputs. This sequence number allows to track for duplicates and missing data using some arithmetics (max, min, distinct). For details look at the code for webrequest_sequence_stats and webrequest_sequence_stats_hourly).

This can also be done in spark, see how: https://phabricator.wikimedia.org/T211000

The quick sampling or searching through recent requests, the data can also be queried directly from Kafka. These Kafka topics are used to populate the wmf_raw.webrequest tables in Hive.

If you want to look at API use, it makes more sense to event.mediawiki_api_request data which is logged directly from MediaWiki when it responds to API requests. The benefits of that data include:

Top raw referrals for an article

Top internal referrals for an article

Top outbound clicks from an article

The following Data Lake tables (accessible via Hive) are derived from the Webrequest table: