A session is defined as a sequence of pageviews from the same app ID that does not exceed 30 minutes of inactivity. 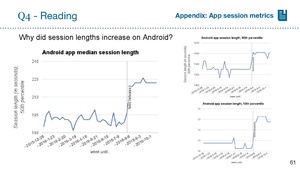 Example application: Impact of the 2016 release of the Android app's feed feature on session length

In both tables, each row provides the minimum, maximum, and four percentiles (10th, 50th, 90th, 99th) for one of the following three metrics, as well as an overall count: